An update on County actions on the Quad Parcels 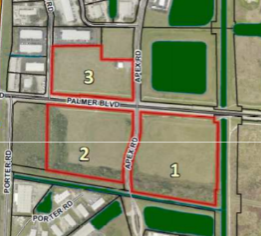 The County has initiated a process. Its aim is to decide what to do about four parcels of public land at Apex Rd. and Palmer Blvd. which the County acquired in 1997, commonly called the Quads.

Two parcels (#1 and #2) have lain vacant for 22 years. Parcel #3 has had a temporary fire station, but will soon have a permanent one. Parcel #4 has a retention pond.

The Planning Department's process, called a Critical Area Plan, is intended to take a new look at these parcels in the context of surrounding lands, assets and uses. Part of the decision about how these parcels are rezoned will depend on which surroundings are considered most relevant.

The immediate surroundings include:

In mid-May (date not yet set), the Planning Department will hold one public meeting to hear input from our communities. The Board got an earful on Aug. 23, 2017, when more than 300 people attended an all-day hearing on a proposal from waste developer James  Gabbert, who wanted to buy parcel #2 and build a 16-acre, open air waste processing facility. The proposal eventually was voted down 3-2, with Commissioners Maio and Moran voting for Gabbert's waste facility.

These are public lands, but the Board, especially Commissioners Maio and Moran, have indicated preference for selling these 30+ acres to private developers. Industrial developers such as Robert Waechter and James Gabbert have long supported the political careers of Maio and Moran. Waechter owns several dilapidated warehouses just south of parcel #2 and has been strongly in favor of putting more industry on the Quads.

Here an update on the May meeting from the lead planner for the county's Critical Area Plan process, Steve Kirk:

The public workshop will be an informal event and staff will be flexible in how it concludes.  Timing speakers would be unnecessary, however, domination of discussions will be discouraged.  Any input regarding CAP should be directed  to me at my address, phone number or email address below.

The intent  of the workshop is to present to the public all the information the staff has at the time, and then hear ideas and feedback from those in attendance.  The staff presentation will include any ideas related to the CAP or the County properties previously provided by the public, including those previously put forth by Fresh Start.* We will also include anything else we receive  prior to the workshop.  It will be made clear in our presentation that we will continue to take public input, and will welcome conversations on the CAP issues after the workshop, and until the CAP study is completed.

Let me know if you have questions.


*Editor's note: Fresh Start was a community-based initiative to propose uses for the Quad parcels that were alternatives to industry. The community provided many ideas which were vetted then voted on by community representatives. Four "finalist" ideas were presented which included a public open space and buffer for the Celery Fields birding area; an ecolodge and restaurant; an athletic complex, and an area of shops and affordable housing. The Board chose to pursue none of these ideas, or to respond to the community's vision. Instead, it paid $29,000 to a Miami consultant, Lambert Advisory, which advised industrial use on parcel #3, leading to this new Critical Area Plan.

When the date / time of the public meeting is set, we'll let you know. 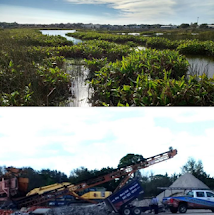 Fresh Start Sarasota
Sarasota , FL, United States
We are a volunteer group seeking to optimize public lands at the doorway to East Sarasota County. We believe there are higher and better uses for these lands near the Celery Fields Preserve, an eco-tourist mecca for birders and recreation, than industry.